Few companies in China spared from overdue payments: 80% of corporates affected in 2015

A survey on corporate credit risk management, to which 1,000 Chinese companies responded, reveals that corporate payments continued to deteriorate in 2015, with 8 out of 10 corporates experiencing overdue payments. Coface, a leading global credit insurance group, forecasts that GDP growth will slow down to 6.5% in 2016 (vs 6.9% in 2015). In addition to the unsolved issues of high leverage and overcapacity in many sectors, downwards pressure on the RMB and stock market volatility are concerns for the Chinese market in 2016. It is not expected that non-payments will improve in the short term.

In 2015, the average credit terms offered by China-based firms decreased again, reflecting a more prudent approach to granting credit facilities to customers. This is most probably the combined result of weak payment experience in recent years, deterioration of confidence and slower growth expectations.

Nevertheless risks have increased, with 80.6% of respondent companies experiencing overdues in 2015 (vs 79.8% in 2014). 58.1% of these firms also reported an increase in the amount of overdues. A higher percentage of respondents (+4 percentage points, i.e. 10% of total) said that average overdue periods have been longer than 150 days. 17.9% of surveyed companies have had to deal with ultra-long overdue amounts (of more than 180 days) exceeding 5% of their annual turnover. The rise of ultra-long payments is putting increasing pressure on company financials.

This is in-line with the non-performing loan (NPL) figures released by the China Banking Regulatory Commission. The NPL ratio reached 1.59% as of the end of 2015, its highest level since 2009 (compared to 1% in 2013). NPLs rose by more than 50% in the first three quarters of 2015. In this context, the risk of a rise in non-payments should not be underestimated.

Chinese firms that are suffering from overcapacity and low profits now have a higher probability of default, since the government has decided to tackle overcapacity and ‘zombie’ companies.  Even though credit growth is slowing, private debt is continuing to grow faster than GDP. China has not yet entered a deleveraging process and the risks are increasing. Outstanding debt held by the private non-financial sector reached 201% of GDP in June 2015, compared to 114% in June 2008 and 176% in June 2013.

China’s 6.9% GDP growth in 2015 was the lowest in 25 years, while Coface’s forecast of 6.5% in 2016 would be another record. Momentum is on a downwards trend, due to the process of rebalancing and low global demand. The authorities are implementing reforms needed to rebalance growth in favour of consumption and services. Despite the positive effect in the medium term, this rebalancing has had some short-term negative effects and generated tough challenges for companies, by hitting profits and exacerbating credit risk.

Stock markets in China have been experiencing a new episode of falls (-16% during the first week of January) and volatility. The heavy use of margin finance (investors borrowing money to buy shares) has increased credit risks and could intensify the downwards spiral. At the same time, the yuan has recorded an unprecedented drop, to reach a 5-year low against the US dollar during the first week of January. The yuan’s valuation is also suffering from capital outflows, worsened by worries about the Chinese economic slowdown.

On the monetary side, the People’s Bank of China (PBoC) initiated an easing cycle in November 2014 and has since cut the prime lending rate 6 times (165 bp), lowered banks’ required reserve ratio (RRR) 5 times (-300bp) and injected liquidity into the economy (1.5 trillion RMB in January 2016, via different tools). Nevertheless, monetary easing measures have not been very effective thus far.

“The government’s strategy is ambiguous and the authorities are caught between two objectives. They need to find a balance between, on one side, supporting GDP growth to prevent a ‘hard landing’ and to protect jobs, while on the other side managing the debt bubble risk. At the same time, businesses in China are facing increasing challenges, such as high leverage with steep costs of financing (despite monetary easing), low profitability (driven by large overcapacities in certain sectors) and volatility on the foreign exchange and stock markets. Monetary easing measures have not been very effective in 2015 and Coface expects more stimulus packages in 2016, as the Chinese authorities endeavour to avoid a hard landing.” said Charlie Carré, economist of Coface.

According to Coface’s survey, the construction sector appears to be the most at risk and the situation is deteriorating rapidly. 28.3% of the sector’s credit sales in overdue are over by more than 150 days and 57% of the sector’s respondents have more than 2% of their turnover impacted by overdues of more than 6 months. Metals and IT report, respectively, 13% and 15.2% of overdue credit sales of more than 150 days – while telecoms are also under pressure. Some sectors are in better shape but even household spending related sectors, such as the retail and automotive industries, are seeing a deterioration in their payment experiences.

Coface has been conducting the corporate credit management survey in China since 2003. The 2015 survey is the 13th edition. 1,000 companies from different sectors participated in the survey, between October and November 2015. The survey provides a better understanding of China-based companies’ payment experiences and their credit management practices. 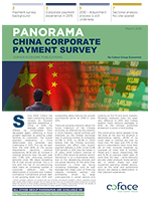