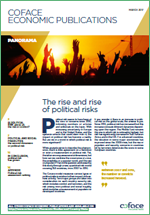 Download this publication : The rise and rise of political risks (1.31 MB)