The improved macroeconomic situation in Europe (aided by the fall in oil prices, the lower euro and the ECB’s highly expansionary monetary policy) has had favourable effects on businesses in the region. Bankruptcies drastically decreased in almost all countries in the region during the course of last year -especially in the four Northern Europe Region (NER) countries we focus on in this panorama, namely Germany, the Netherlands, Sweden and Denmark. This positive scenario was seen by most of the sectors across these countries. Only in Denmark, were the developments more disparate. Throughout the NER-countries, insolvencies were fairly frequent among the Trade, Transport, Accommodation and Construction sectors – both in terms of share of total insolvencies and their share in economic activity. In contrast, business failures in Manufacturing were less frequent.

On the back of slightly weaker average GDP growth for the four economies over the course of this year, the downward trend in insolvencies should continue, but the rate of decrease will be lower. The strongest declines are expected in the Netherlands (-11.1 percent in 2016), Sweden (-8.0 percent) and Germany (-2.5 percent, following -4 percent in 2015). Denmark, however, shows a contrasting picture. As the macroeconomic situation has improved during recent quarters, a positive trend in insolvencies can be seen in many of the euro countries. Insolvencies in France (-3.2 percent), Italy (-5 percent) and Spain (-22 percent) are also forecast to decline in 2016. 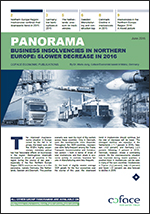