Could SMEs become the weak link in China’s economy?

when considering risk in the Chinese economy, a lot of the discussion has focused on large State-Owned Enterprises (SOEs), or large private conglomerates. However, headwinds impacting an understated group of smaller firms have the potential to be much more disruptive: Small and Medium Enterprises (SMEs) account for the majority of enterprises and a sizeable proportion of employment. However, the need to address financial stability risks associated with China’s vast corporate indebtedness – most of which has historically been associated with SOEs – has left SMEs scrambling to access financial resources to meet their working capital and long-term expansion needs.

Policymakers have since retracted on their tightening stance, afraid that a looming trade war with the United States, rapidly deteriorating financing conditions, and bond defaults could threaten the Chinese economy.

A return to a more accommodative monetary policy stance will not sufficiently alleviate pressures for SMEs. Given their understated importance, it is likely that policymakers will take steps to prevent SMEs from becoming the weak link in China’s economy. In order for this intervention to be successful, the measures to implement will likely include prudent fiscal stimuli, a rational approach to regulating shadow banking, and a shift to more market-based interest rates, so as to reward underwriting procedures that allocate adequate risk returns. 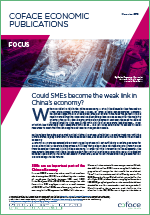