Russia – from recession to recovery, but to what extent and how fast?

Between 1999 and 2008, Russia’s GDP grew by an average of almost 7% per year. In 2009, the fall in oil prices led to a severe recession (-7.8%). Subsequently, the effect of factors that had supported growth ceased. The further fall in oil prices in the mid-2010s, coupled with an unfavourable international context (declining demand in Europe, sanctions, etc.), led to a contraction in activity for two consecutive years (-2.8% in 2015 and -0.2% in 2016). Between 2009 and 2016, the average annual growth rate was close to zero and the growth forecasts for 2017, again positive, remain very low (1% according to Coface forecasts).

However, in their medium-term development plan1 , the Russian authorities are aiming for a minimum annual growth of 5%. The need for a change in growth model, dictated by the changing international environment (a sustained lower level of oil prices) seems to be well accepted by the country’s authorities. It is also urgent for Russia to regain a sufficient pace of growth in activity to halt the deterioration in the standard of living of its population, whose proportion of living below the poverty line exceeded 13% in 2015, compared to less than 11% in 2012.

Nevertheless, the political situation, both national and international, as well as structural and cyclical constraints, are not conducive to change and conditions for an upturn in activity seem far away: even if growth is expected to increase, it should hardly exceed 1.5%, especially in the absence of lifting sanctions and of measures to improve governance. Yet, activity should be more dynamic in some sectors, such as agri-food and chemicals. Furthermore, the rise in automotive sales observed early 2017 points to a more positive trend for this sector in 2017.

DOWNLOAD THE PUBLICATION Russia – from recession to recovery, but to what extent and how fast? 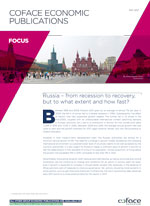 Stiahnuť túto publikáciu : Russia – from recession to recovery, but to what extent and how fast... (488,64 kB)


Russia is emerging from recession, but the structural constraints risk impeding its mid-term growth