2017: A year of political and banking risks for emerging countries

World trade under the threat of protectionism

Following two consecutive years of slower world growth, the outlook should improve slightly in 2017 (up from 2.5% to 2.7%). This will be driven by a rebound in business in emerging countries (4.1% growth), due to the recoveries in Brazil and Russia offsetting the slowdown in China. Advanced countries will see stable growth of 1.6%.

The lacklustre development in world trade (forecast at 2.4% for 2017, compared to an average of 2.2% between 2008 and 2015 and to an average of 7.0% between 2002 and 2007) could be further compounded by the resurgence of protectionist measures, following the election of Donald Trump. In the short term, these measures will have a lesser effect on America’s economy at the end of the cycle (+1.8%) than they will have on other countries that export heavily to the USA: Central America (notably Honduras, El Salvador, Mexico and Ecuador) and some Asian countries (such as Vietnam and Thailand).

Given Mexico's strong reliance on exports to the USA (which represent 7% of its GDP), against a backdrop of higher inflation and falling investments, Coface is downgrading its country risk assessment to B. Argentina, however, will be relatively immune to the "Trump" effect and, after a difficult year, should start to reap the benefits of its reforms. Coface is therefore upgrading its country risk assessment for Argentina to B.

Global political risks at a record high in 2017

Political risks will continue to be a major concern in 2017.

Among the advanced economies, it is Europe which is facing the greatest political uncertainties, as it awaits the outcome of a number of decisive electoral battles, as well as details on the exact terms of Brexit. Over the last year, Coface's European political risk indicator has increased by an average of 13 points for Germany, France, Italy, Spain and the United Kingdom. If there is a further major political upset, on a similar scale to that of the British referendum, European growth could slow by an average of 0.5 points.

Political risks in emerging countries are higher than ever, driven by social discontent and heightened security risks. The CIS (because of Russia, with a score of 63% out of 100% in 2016) and North Africa/Middle east regions (with Turkey and Saudi Arabia both at 62%) show the greatest risks among the major emerging economies. The rise of political and social frustrations in South Africa is partly to blame for the downgrade of its assessment to C, within a climate of very poor growth.

Security risks, which include terrorist attacks, conflicts and homicides, are a new factor in the emerging political risk indicator. Unsurprisingly, these are highest in Russia and Turkey.

Credit risks: high levels of company debt are a threat to the banking sector in emerging countries

These increased credit risks can assume different forms, depending on the country.

The level of company insolvencies should continue to fall in advanced economies. The negative aspect is, however, that the amount of company creations is often lower than pre–crisis levels (a variation of -19.8% in Germany, -5.1% in the United States and -4.1% in Italy between 2015 and pre-crisis peak levels). Loans granted to highly-indebted companies are straining the resources available for fast-growing younger companies.

Excessive company indebtedness is another problem for emerging countries. Companies in China have the highest levels of debt (equivalent to more than 160% of GDP) and this debt rose by 12 GDP points between the second quarter of 2015 and the second quarter 2016. The rate of bad debt in the banking sector is rising sharply in Russia, India, Brazil and China, while credit conditions are becoming stricter.

Upgrades in Europe and sub-Saharan Africa

This is the first time since mid-2015 that Coface has made more upgrades than downgrades in its country risk assessments.

Spain has been upgraded to A3, while Iceland and Cyprus (where risks related to capital controls are decreasing), are now assessed A2 and B respectively. Central European countries are continuing to improve in the ranking, among the 160 countries assessed by Coface. Estonia (A2), Serbia (B) and Bosnia-Herzegovina (C) have all seen improvements in their business environments and growth in these countries is reaching comfortable levels. Bulgaria (A4) has confirmed its recovery, thanks to moderate growth and the continued consolidation of its banking sector.

In sub-Saharan Africa, smaller countries are faring better than the larger economies. Two of the best performers in the region are Ghana (B), which passed its democratic maturity test in December, and now has a good level of public finance management, and Kenya (A4), which has seen a boost in tourism and increased public investments.

DOWNLOAD THE infografic : An economic upturn in the face of political risk 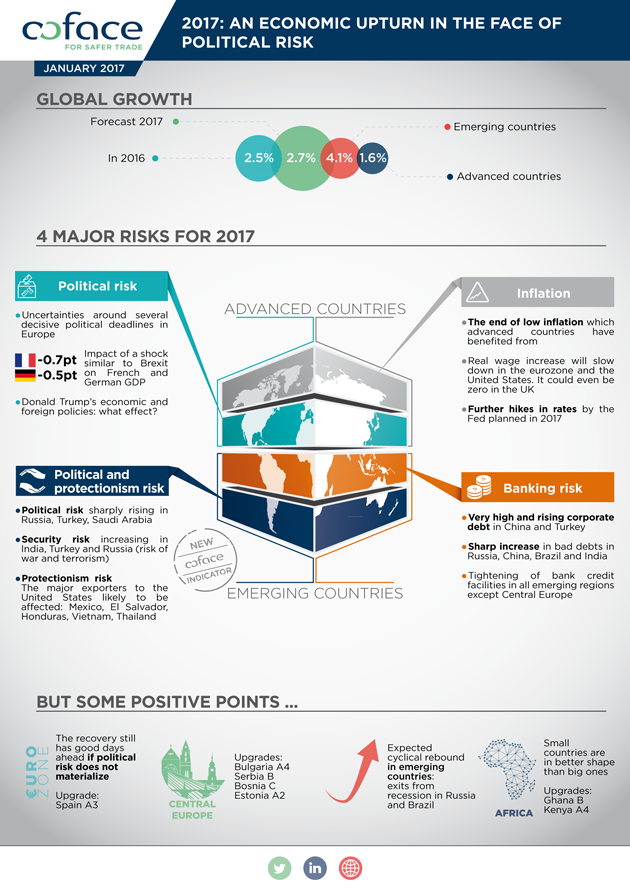 Download this press release : 2017: A year of political and banking risks for emerging countries (267.03 kB)
Top