Western Europe: against a backdrop of early signs of stabilisation, several sectors continue to show high risk
While the recession appears to be coming to an end in Western Europe, it has not yet produced a significant improvement in sector risk. In the first quarter of 2014, the level of credit risk remains particularly high in the metal, automotive and construction sectors. The metal industry, in which turnover and profitability are in steady decline, is dependent on the construction and automotive sectors, its main outlets. We remain vigilant with regards to the European automotive sector despite a positive trend, illustrated by six consecutive months of rising sales. Therefore these two sectors remain in Coface’s “very high risk” category. 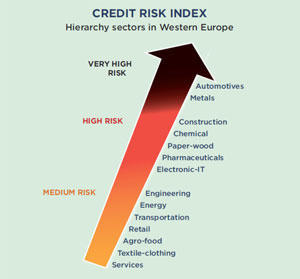 Construction, currently considered "high risk", has seen a fall in its order book at a European level (down 10% in January 2014 compared with January 2013) and prices
are generally in decline. Apart from Germany and Denmark, where there is a slight recovery, the sector has been severely impacted by the reduction in the number of planning permissions in Southern Europe, France and even the UK.

North America: favourable outlook
North America forges ahead, posting continued improvements in corporate results. Financial solidity is gradually increasing, stabilising the sector risk assessment. The majority of sectors are considered "medium risk" and the short-term outlook is favourable in several sectors. These include the engineering sector, which is attracting increasing investments and
strengthening its profitability (average rate of 17.5% at the end of 2013) and the automotive sector which benefits from sound financial foundations.

Credit risk in the textiles and clothing sector is also stable, with 6,000 jobs to be created and more than 4 billion dollars of investment planned in 2014.

Emerging Asia: metal industry downgraded to "very high risk"
Unlike Western Europe and North America, where risk is tending to stabilise, emerging Asia presents a fresh source of concern. The slowdown of activity in China highlights structural difficulties that are affecting companies’ profitability. Sectors suffering from overcapacity now face a restructuring challenge.
This is the case in the metal industry where the company clean-up process is accompanied by an increase in risk. According to Coface’s survey in China (a country producing 49% of the world’s steel), 80% of companies suffered from payment overdues in 2013, the highest level in the last three years. In this context, the metal industry in emerging Asia is currently the only sector being downgraded by Coface to "very high risk”, the highest risk level. 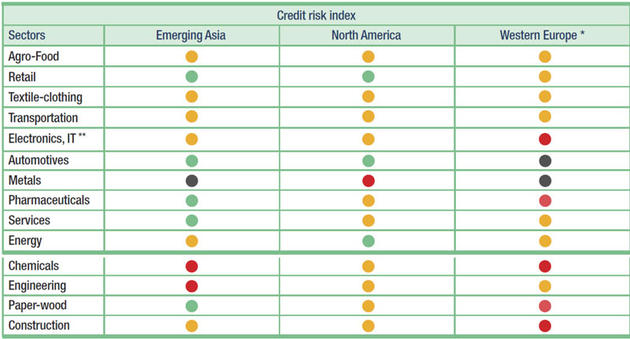