The UK automotive sector and Brexit - or, how to slow a rolling industry?

The UK automotive industry is entering a dry period. The voices of the main UK industry representatives and their concerns regarding the negative effects of a potential hard Brexit appear to remain unheard, while other difficulties are accumulating against the backdrop of uncertainty. These representatives believe that current negotiations between the UK and the EU are, at this stage, unfavourable to them, despite the Prime Minister recently emphasising the country’s will to remain in the Single Market. The prosperous years of the UK’s automotive industry seem to be a thing of the past. Despite its many advantages, the sector will have to renew itself once again if it is to resist the impact of Brexit. At a time when the automotive sector has to contend with multiple challenges, the prospect of a disorderly exit from the European Union weighs on the capacity of its players to invest and innovate. A weakening of the UK executive adds uncertainty to the future of the sector.

Has the sector stalled?

The automotive sector is a major industry in the UK. According to the UK’s Office for National Statistics, the automotive industry generates around 16 billion pounds sterling (or 18 billion euros), while revenues generated by the industry have risen by 55% since 2010. The sector represents almost 1% of GDP and around 9% of the value added of the UK’s manufacturing industry. It ranks fourth in Europe in terms of production, according to the European Automobile Manufacturers' Association (ACEA), behind Germany, Spain and France, and employs 169,000 people. Moreover, it boasts the secondhighest productivity of these top four countries (10 vehicles per employee), behind Spain. At the worldwide production level, however, it ranked only 13th in 2016 - far behind China and the US. The industry is strongly geared toward exports, with close to 79% of vehicles assembled in the UK exported, 55% of which to other EU countries, around 16% to the US, and 7% to China. This is explained by the focus of UK manufacturers on “premium” vehicles. The UK is thus home to a hub of manufacturers known worldwide for the quality of their vehicles: Jaguar, Bentley, MINI, MacLaren, Land Rover, Aston Martin, etc. However, virtually all of these brands are subsidiaries of large international groups, notably BMW and Tata Motors. Furthermore, this industry is integrated within the rest of the European Union (EU). According to UK customs, the country imported 80% of its auto components in 2016. 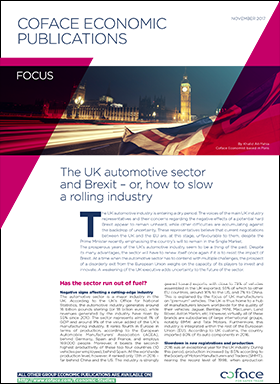 Download this publication : The UK automotive sector and Brexit - or, how to slow a rolling indust... (523.10 kB)
Top